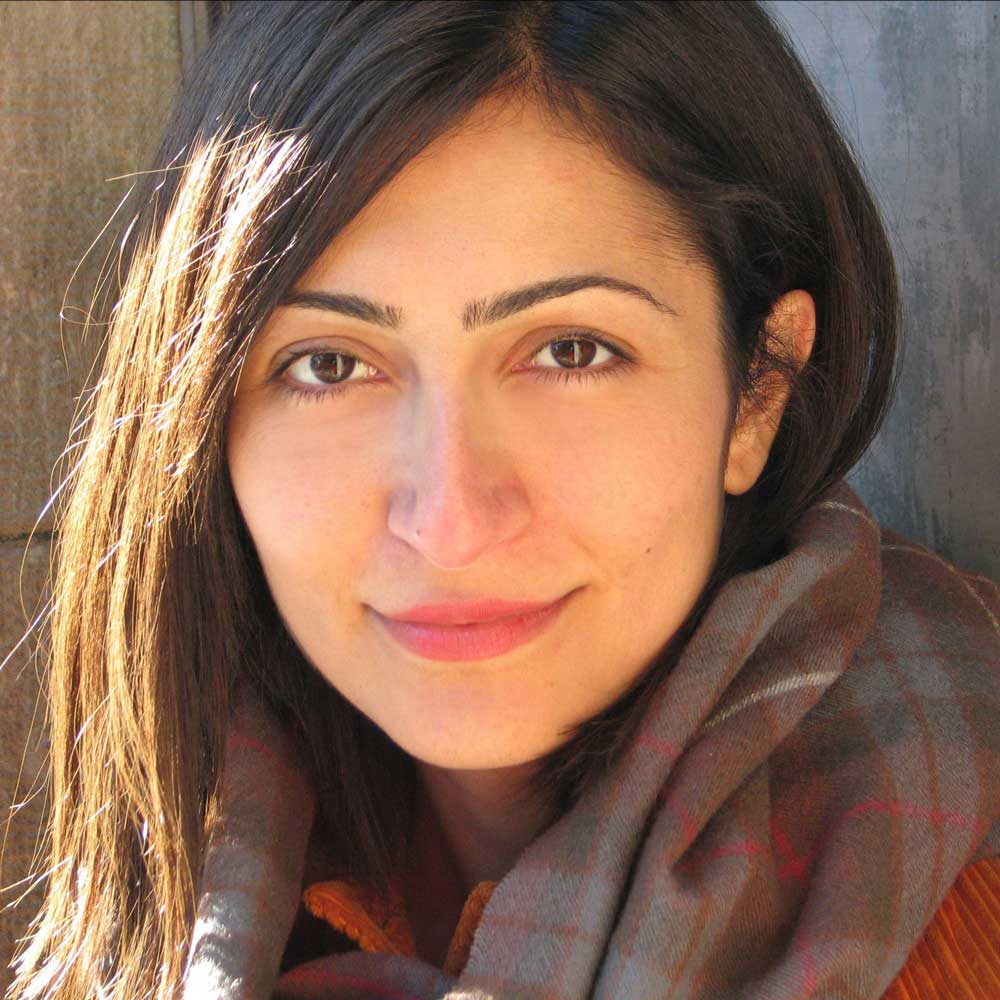 Sahar Muradi is a writer and performer born in Afghanistan and raised in the U.S. Muradi is co-editor, with Zohra Saed, of One Story, Thirty Stories: An Anthology of Contemporary Afghan American Literature, as well as co-founder of the Afghan American Artists and Writers Association. Muradi has been published in several journals, including Bone Bouquet, Drunken Boat, DOCUMENTA, phati’tude, elsewhere, and The Poetry Project Newsletter.  Muradi is the recipient of the 2016 Stacy Doris Memorial Prize and twice recipient of the Himan Brown Creative Writing Award in Poetry. She is a Kundiman Poetry Fellow and an AAWW Open City Fellow. She received an MFA in poetry from Brooklyn College, an MPA in international development from NYU, and a BA in creative writing from Hampshire College. Currently, Muradi directs the poetry programs at City Lore, and dearly believes in the bottom of the rice pot.

The Reading from the Author

Use the following readings and prompts to inspire student writing.

Read the following passages from One Story, Thirty Stories: an anthology of contemporary Afghan American literature, edited by Zohra Saed and Sahar Muradi:

Write family poems based on photographs. Take into account your parents’ heritage and identities.

Interview a relative and then write a poem or prose-poem from your perspective which indirectly tells the challenges of that relative in the past using questions, free verse, details, or other poetic devices.

Look at past pictures from a family album. This could be a mother, father, aunt, uncle, grandparent. Interview your family member asking questions about challenges, losses, regrets, things they waited for, etc.

More ideas for poetry based on pictures:

1. Look at the photograph long and hard until you are deeply moved. Perhaps the subject of the photo is no longer alive, or it was taken before you were born, or you are there in the picture as a young child. Perhaps behind you stands the house where you grew up and to which you have not returned in many years. Use at least four of the following dozen words in the poem, though not necessarily in their photography-related meaning: lens, reflex, develop, blow-up, crop, negative, shoot diaphragm, expose, focus, reel and print.

Begin the poem by describing the photograph, making three observations. Then tell us two or three things that we would not know from the picture. Let those draw you into your past until you discover something that you had never realized – or had never before dared to reveal to yourself or others.  (Steve Kowit, In the Palm of Your Hand)

2) Take out an old family photo and address the people in it or have them speak about it. Write about what’s not in the frame: what happened before or after the picture was taken? What does the writer know now that the people did not know then? Or try comparing two photographs- one past and one present. Consider what happened in the time between the two (Kim Addonizio, The Poet’s Companion)

3) Write a story-poem of how this scene came to be, or what’s happening, or what will happen. Here are some suggested ways of doing so:

Choose your photo. Walk into it. Look out of it. Write a poem that will make us see the photo and beyond the photo. Make the words more than the picture.

I. Camera Obscura
The picture is cold. You know how an object can be colder than another object at the  same temperature? Below zero, yes. I shake the photo. The strands tremble, and with a little prodding, the sand begins to fill around my feet, a sempiternal, non-gravitational hourglass. The people in it start to move and I taste salt in the air, ephemeral whitecaps fizzing in and out of existence. Even under the sheet, I feel how cold this day is– but there are two sources of heat, and it is this that I turn my attention to. I blink, and the people begin to move. I only recognize one of them.

II. Adjust Aperture
The shoot diaphragm, a nine-blade iris, moves like sharks, each swimming through a sea  of metal like it was oil. Each one glitters, a microscopic sliver of the sun. The lens flare is pixelated, turning sea into sky. The scene luminance was minimal, except for two lone stars. A binary star system, that’s what a physicists would call it. Gravity, the quantifiable, particle physics description of love– it’s everywhere in the photograph. It weighs me down, makes the sheet that would otherwise loft into the air settle near the ground, the body underneath skeletal. The camera scintillates, hardened quicksilver that stays well out of the way of the flash sync terminal. No electrons travel there now; there is no flash, no miniature explosion of a lightbulb.

III. Strands
I watch as the child, infantile, the color of the Moon, plays. There is a hole, there, next to them. What’s it for? I couldn’t tell you. Digging holes, then bridging them together with tunnels, maybe, most likely in fact. I have to remember so many lifetimes at once, piece them together– well, never mind. This is raw, this is unedited, curated or calculated, and I must say I smile as I see the utter confused joy on the child’s face. They’re happy, but it’s clear from the hat they’re windblown, at least on the inside. All I can see, oh Mother, all I can see is love.

IV. Silence
You can almost see the glass that makes the waves. At least– you can see it when it breaks, fragments over the beach, turning golden sands into broken stained glass windows. The child looks away, almost as if the love goes unacknowledged. And that’s the saddest thing, isn’t it? Unacknowledgement? Do not worry, ghosts do no harm, they are used to being unacknowledged. We normalize it, and that scares me. But here, no, it’s not that. It’s merely a child, insatiably curious, stuck peering through a keyhole. My mother doesn’t see it.

V. Frost
In this photo, yes, I’m probably cold. California gives you a chill, one that I am still not rid of. There is one thing that makes the Californian ice melt. You know love, that head-over-heels, sucker punch feeling? My mother and I, we share it, cultivate it. Nipping even a bud, even so a beautiful chrysanthemum can bloom, hurts more than lightning. I try and let go as the shutter is released.

VI. Ghost Story
The sea spills out of the frame, the sands swirl around, golden stardust. In the background of the frame, I can see a white sheet fluttering, like one of those ghosts kids dress up as for Halloween. A benign spirit, that’s what a pagan would call it. The same deep, dark eyes, those eyes filled with violent emotion, that crazed bit of green shining, that fills the faces of those in the frame, you can see it behind them. You can’t? Look harder. You’ll see me, the little ghost, behind there. In the waves, the hills, every little granule and pixel, a little ghost with two piercing eyes and a bedsheet-white body, windblown. It’s a note to self, a ghost story I never realized was there until I myself was the phantom.

A Dusty Picture Frame on a Shelf

Your dreams and aspirations remain in a silver frame atop a dusty shelf. You smile with your eyes through short-cut bangs and hold hydrangea flowers against your dress. You are wearing a simple, yet elegant dress that cascades down your body.

And there you lean against your husband, the man in a naval white uniform, with dreams dancing inside your head of traveling the world with your new sailor. Dreams of Thailand, Iceland, and other far-away places. Dreams that will one day fizzle from long airplane rides and long distance phone calls and deployments.

But in this picture you hold those hydrangeas like you hold onto your dreams. And flowers fade brown and wilt in an old dusty cupboard at grandma’s house like your dreams. You stand there in that photograph with the taste of lobster in your mouth from the dinner you ate about an hour ago. It was probably the best lobster you had ever had.

Traveling the world is fun at first. Japan. Singapore. India. And you decide to make Tokyo your new home. But Tokyo is a concrete jungle full of men who smell like sweat and fish and make you, a pregnant woman, stand on the train while they sit. You decide that a 600 square foot apartment is not the place to raise a wailing newborn child and pack your things to move back to the place you thought you wouldn’t go back– The United States of America.

You stand at an angle in this picture to hide the stain on your wedding dress. You turned the world upside down looking for this dress you saw in a catalog one day. You couldn’t find it so you sewed it yourself. Months of tedious work so Evelyn doesn’t pay attention to her glass of champagne that spills all over your masterpiece.

And you sit alone on the couch nestled in a blanket almost twenty years later as you finish yet another season of some show on Netflix that isn’t very good. Your husband is in Thailand, and for some reason you can’t really explain, you have the taste of lobster in your mouth. You drift asleep dreaming of the night my father held you in in his arms on the porch in the dress you made yourself.

At 3 a.m. that morning, you wake up and spontaneously purchase a ticket for the next flight to Thailand.

Father and daughter look so intently

at the entire world laid out on a map. Its creases reflect the sun like a mountain ridge,

the napkin cast into the backseat

At the mercy of the violent white Californian sun.

The day is at standstill, watching the figures in the car—

Both are bedraggled, anxious, sweat drips down her curling hair and

His too-small khaki hat flails to shield the stickiness.

They are fugitives on the sly, running from the law,

Deciding where they should flee to and wondering

If this car will lead them there,

Looking for the location of the horizon

and when will they reach it. And

after the car passes it by,

Will they just fall off the edge of the earth?

Only to land next to the napkin in the backseat,

Doomed to look over the shoulders of more

on the new leather seats,

in the convertible, (plastered with

or serious injury that may occur)

Looking over the map

Shuffling through oceans of paper, envelopes, and stamps,

I suddenly found it.

A picture of three men,

two of whom I didn’t know,

but the middle one was hard to miss.

He stuck out like a fish out of water.

He stood there, leaning on two chairs,

Judging by the suit he was wearing,

A mustache and combed back hair,

It must have been

the  era of disco balls,

the Bee Gees, and gold medallions.

He was James Cagney in Smart Money,

and Clark Gable in Gone with the Wind.

Was he in his house?

Perhaps, but it didn’t matter.

All I could focus on were the shutters in the background;

the shutters that put a cloak over the rest of the world,

so that this moment was the only thing that mattered.

I put the picture back,

Questions stayed in my mind,

Some things are better left untold.

Don't be shy. Let me know if you have any questions!